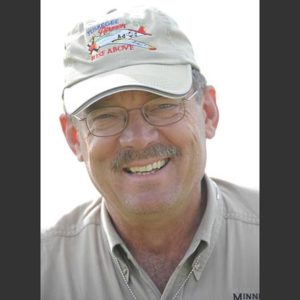 Doug Rozendaal grew up on a farm in Central Iowa. He will tell you, “I got my pilot certificate in a Cessna 150, one dollar at a time, with money I did not have. But I learned to fly in the DC- 3 and Beech 18 hauling freight.”

Now an FAA designated pilot examiner, he is Airline Transport Pilot rated. A Certified Flight Instructor for both Instrument & Multi-engine, he holds Single and Multi Engine Seaplane rating, a glider rating with type ratings in the Citation, CitationJet, B25, DC-3, PBY, TBM, and authorizations in the P-51, P40, F4-U, F6-F, Zero, and T-28 including the coveted “All makes and models, single and multi-engine piston powered” endorsement.

He holds a surface level aerobatic waiver in 8 different types of WWII fighters and Sport aircraft. Doug serves as chair of the board of directors of the Commemorative Air Force and served several terms as the chair of the Safety Committee at the International Council of Airshows. He was a member of the US Navy Legacy Flight team and flew WWII Navy aircraft at airshows with modern Navy fighter Aircraft.

Doug says, he’s the “luckiest guy you ever knew.” He spends weekends flying various warbirds for the Commemorative Air Force, other museums, and private collectors.

His aviation experience is over 10,000 hours in over 200 different types of airplanes. He is an aviation writer published widely and speaks nationwide about aviation safety.

In his spare time, he owns and operates PetroBlend Corp., a lubricant manufacturing, and contract packaging business in Mason City, Iowa. He also owns a real estate development business, is a gentleman farmer, and buys and sells a few airplanes, to fund his aviation habit.