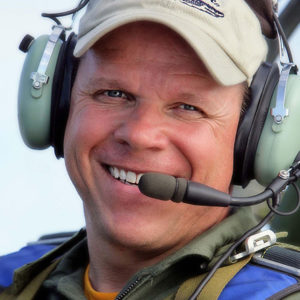 Congressman Sam Graves is a lifelong resident of northwest Missouri. Sam was born in Tarkio on November 7, 1963, and graduated from Tarkio High School in 1982. He went on to receive a degree in Agronomy from the College of Agriculture at the University of Missouri-Columbia.

Sam is also a lifelong general aviation enthusiast. As a teenager, he was fortunate enough to have a general aviation airport near his family farm, where he and his brother would offer to wash airplanes in exchange for rides.

Today, Sam holds an airline transport pilot license in multi-engine land, commercial privileges in single engine land and sea, and is type rated in the TBM Avenger and all models of the P-40 and P-51. In total, he has logged over 4,000 hours of flight time. Sam owns a 1947 Piper Cub Special, and is partners in a T-6 Texan and Vultee BT-13. He is also restoring a 1943 Beech AT-10.

When he’s not in Washington or working with the Wing Nuts Flying Circus, one of Sam’s most passionate interests is his involvement with the Texas Flying Legends Museum team, which led the ceremonial flyover of the National Mall on May 7, 2015, the 70th anniversary of VE day.

As Sam continues to work with members of the general aviation community and his colleagues in the House, one of his top priorities remains ensuring general aviation’s voice is heard in our nation’s capital. He brings a unique perspective to this process as a member of major aviation organizations like the EAA Warbirds of America, AOPA, EAA, CAF, AAA, and RAF.